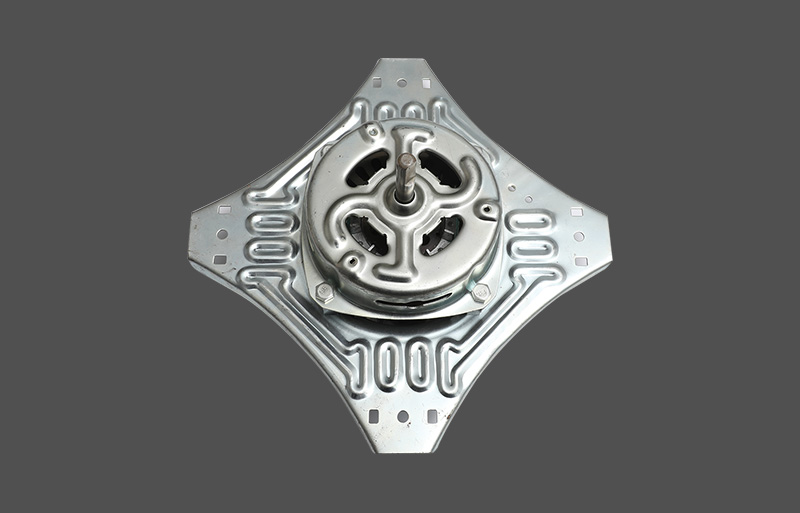 When we use external force to rotate the motor in a certain direction (such as clockwise rotation), then the movement of the cutting magnetic field lines between the rotor and the clockwise rotating magnetic field becomes smaller; the difference between the rotor and the counterclockwise rotating magnetic field The cutting magnetic field line movement becomes larger. In this way, the balance is broken, the total electromagnetic torque generated by the rotor will no longer be zero, and the rotor will rotate in the direction of pushing.
To make the single-phase motor rotate automatically, we can add a start winding to the stator. The start winding and the main winding are spaced apart by 90 degrees. The start winding should be connected in series with a suitable capacitor so that the current between the main winding and the main winding The phase difference is approximately 90 degrees, which is the so-called principle of phase separation. In this way, two currents that are 90 degrees apart in time pass through two windings that are 90 degrees apart in space, and a (two-phase) rotating magnetic field will be generated in space.
Under the action of this rotating magnetic field, the rotor electric exhaust fan motorscan start automatically. After starting, when the speed rises to a certain level, the starting winding is disconnected by means of a centrifugal switch or other automatic control device installed on the rotor. During normal operation, only the main winding is available. jobs. Therefore, the start winding can be made into a short-time working mode. But there are many times, the starting winding is not disconnected. We call this kind of motor a single-phase motor. To change the direction of this kind of motor, just change the terminal of the auxiliary winding.
In a single-phase motor, another method of generating a rotating magnetic field is called the shaded pole method, also known as a single-phase shaded pole motor. The stator of this kind of motor is made of salient pole type, which has two poles and four poles. Each magnetic pole has a small slot at the 1/3-1/4 full pole surface, dividing the magnetic pole into two parts, and a short-circuit copper ring is fitted on the small part, as if covering this part of the magnetic pole. So it is called a shaded pole motor. The single-phase winding is sheathed on the entire magnetic pole, and the coil of each pole is connected in series, and the polarities generated during connection must be arranged in order of N, S, N, S. When the stator winding is energized, the main magnetic flux is generated in the magnetic poles. According to Lenz's law, the main magnetic flux passing through the short-circuited copper ring generates an induced current in the copper ring that lags 90 degrees in phase. The magnetic generated by this current The flux also lags behind the main magnetic flux in phase, and its function is equivalent to the start winding of a capacitor motor, which generates a rotating magnetic field to make the motor rotate.

PREV: What are the classifications of permanent magnet synchronous motors?      NEXT: Washing machines are usually machines that reduce labor
Product Catalog

Please leave your Email or phone nomber, so we can contact you as soon as possible.